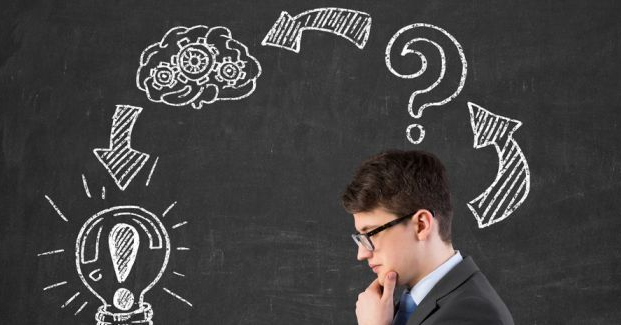 Before going ahead in this lesson, which is part of complete GAT Preparation Online course, it is extremely important to read the answers of the following frequently asked questions about GAT Analytical Reasoning section:

What is tested in GAT Analytical Reasoning?

This section grades you on how efficiently you can reason to solve logical puzzle based on given sets of conditions (sometimes called as limitations) in such a short span of time. Sometimes, it is also called group reasoning, where group of information is given and you need to answer based on the given information. If you can accurately extract information in a diagrammatic style, such questions become easier. In this section, your brain’s work of analyzing & diagramming (or sketching) the information is much more critical. This section tests your Analytical Reasoning skill in addition to Time Management.

What’s the trick to get 99th percentile rank in GAT Analytical Reasoning Section?

Keep the following important points in mind that would help you to achieve the target score in this section:

You should know the exact meaning of the following questions:

Will be true EXCEPT:

Could be true EXCEPT:

Cannot be true EXCEPT:

To understand the general format of the question, consider the following simple example scenario at this beginners stage. In advance level, we’ll discuss actual questions scenarios with medium and hard difficulty levels questions with according strategies. After covering that complete, you will become expert in analytical reasoning section.

Answer Question 1 – 4 based on information below:

Five people (namely: A, B, C, D, and E) took GAT exam, and were got ranked according to the given condition:
– Mr. A was amongst top Three in the exam.
– Mr. B was on Fourth rank.
– C was on the adjacent rank next to E.

To answer these questions, always make arrangements according to the conditions given in question. i.e.,

• First condition (or we may say first restriction) tells information about the possible positions of A, that may only be placed on first three positions as shown below:

• Second condition (or restriction) tells information about the position of B, which must be placed at fourth position/rank. i.e., 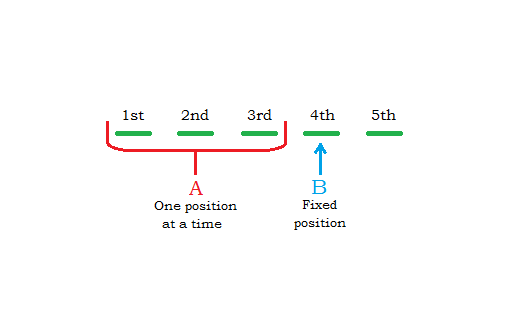 • Third and final condition tells information about the places of C and E, that must be place on adjacent places, i.e., place side-by-side; such that C must place after E place. The word “next to” signify that C must place just after the rank of E, i.e., not before E place. Because both have to be place together, so neither C nor D can place at 5th position/rank and, therefore, can be placed at first three positions, as shown below: 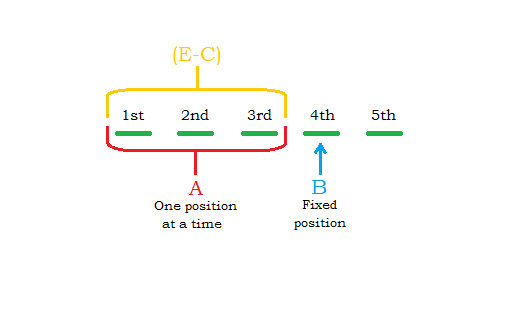 Finally, one person D is left with only a position of 5th; So it must be fixed on this position, as shown below: 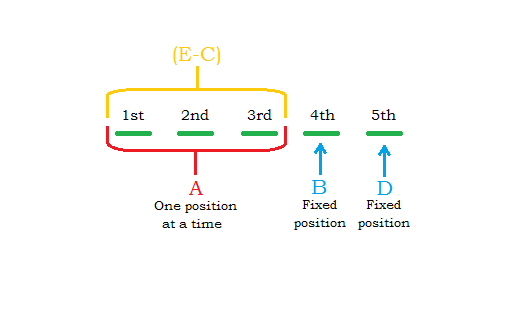 Now, let’s answer each question one by one after making diagrammed sketch of the information given in question.

The answer of first question is (d) because we can see that only D is the person that got the 5th rank.

As the question makes further restriction to A, that gives specific place of A. Because the position of A becomes on the place that has next adjacent place of B, who is at 4th rank, therefore the rank of A is 3rd here according to the information of question. So we should change the original diagram according to the information of this question and solve for the first position, as shown below: 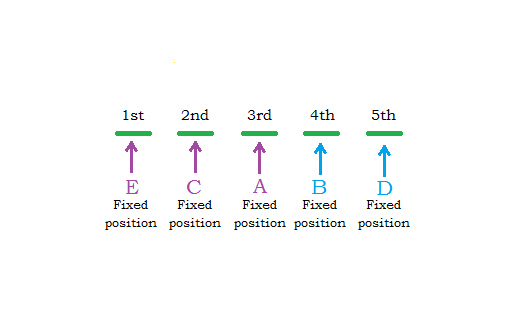 To answer this type of question, always start from the original drawing and place the persons to the ranks that are fixed. So we should place B at 4th and D at 5th rank respectively that are fixed. Now as there are 3 persons remaining with three ranks such that E & C will place together, i.e., A can’t be placed between E and C. Therefore only two arrangements are possible. To solve it we need to suppose (E-C) as one pair that can’t be separated or interchanged (i.e. can’t be placed as (C-E), as C will have rank after E. These two possible arrangements are shown below: 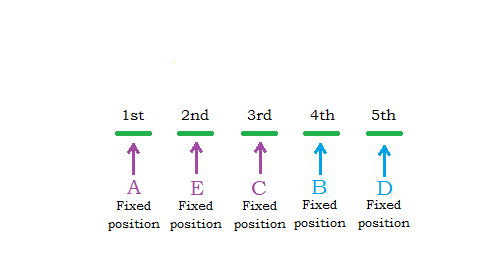 Except these two arrangements/order of ranking, any arrangement would be incorrect. So only choice C cannot be the possible arrangement of ranking from Top to Bottom.

Refer to the explanation of Question 3 above. As there are only two possible arrangements of ranking, therefore choice c would be the right answer.

best type of problem solving and thanks…!